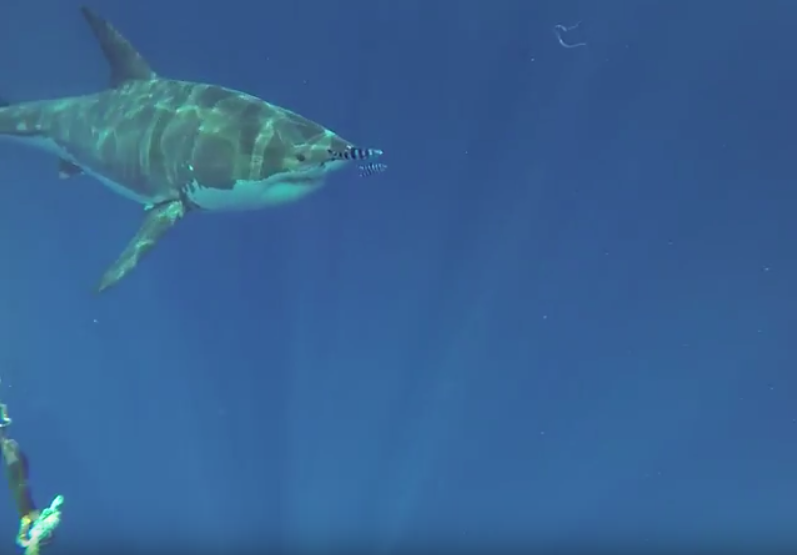 Get Up Close and Personal!

We pioneered Great White Shark Diving at Guadalupe Island. So pick a trip, step on board and get ready to get “up close and personal”!

Ask yourself… “when I visit San Diego do I want the experience of a life time or do I want to hang out and do the same things everyone else does?” If you’re looking for safe fun, excitement AND the adventure of a lifetime then San Diego Shark Diving Expeditions is for you.

Guadalupe Island has been a world-class sport-fishing destination frequented by the San Diego long-range fishing fleet for many years. Known primarily for its fishing, Guadalupe Island is now making a name for itself as host to one of the worlds most prolific populations of Great White Sharks.

This is a fantastic opportunity you will find nowhere else, and with over 30 years experience in diving with sharks, Jim Abernethy can assure you the very best up close encounters. We have numerous new locations, and we’re seeing a lot of the same sharks at each site, along with many new sharks every day.

Two Hundred Sixty miles southwest of Cabo San Lucas is a group of islands called Islas Revillagigedos.These islands are famous for their “Big” fish encounters. Particularly the “friendly” Giant Pacific Manta Rays that seem to enjoy having divers interact with them. They actually seek the attention of the divers.

Join us on this very special trip to what just might be the greatest gathering of feeding Whale Sharks on the planet! We have timed the trips to be at Isla Mujeres during the height of the Whale Shark season. In my 45 years of diving I had never seen such a large number of Whale Sharks in one area!

Join other lucky divers and adventurers on a special expedition to Fiji to dive with up to 8 different different shark species. Not only will you be diving with the main targets, Bull Sharks, but also possibly Tiger Sharks, Silvertip, Lemon, Blacktip, Whitetip Reef Sharks, Nurse and Grey Reef Sharks.

Doc is the Owner/Instructor of SD Shark Diving, was the pioneer who started the Great White Shark diving tours at Guadalupe Island and has been actively conducting shark diving tours since 1994.

San Diego Shark Diving Expeditions, Inc. was founded by noted underwater film makers and photographers Bob Cranston and Marty Synderman in 1986. By 1993 both Marty and Bob were getting so many film assignments that they needed someone to come in and take over the shark diving business that they had started. In late 1993 Paul “Doc” Anes purchased the company, retaining Bob Cranston as a consultant.

As a 21st birthday present to himself he took scuba lessons in 1969. After transferring to San Diego State U. in 1970 he signed up for the first advanced scuba certification offered as an extension class taught by Mark Flahan who was the diving safety officer at SDSU. He progressed as an assistant instructor helping Flahan with the basic classes and eventually earned his NAUI instructor rating in 1974 as Instructor # 3734.

After graduation from SDSU he went back to an old skill of building custom boats, until 1982 when he was offered the diving operations manager position at the old Tortuga Club located at the East End of Grand Cayman Is. That was some good diving! He transferred to the Spanish Cove Resort at the NW end of the island in 1984 where he focused on just being a divemaster and boat captain. It was a pretty hot resort back then. Peter Hughes subsequently asked Doc if he wanted to take over the manager’s position of Dive Bonaire.

Doc worked there until Sept of 1985 when he returned to San Diego to get “re-civilized” Right back to building boats again and an occasional captain gig until 1993 when he got an “out of the blue” call from Bob Cranston. Bob owned San Diego Shark Diving at the time and was looking for someone to come in and take over the business. The rest is history.
Now we’re looking for new adventures with sharks around the world. To hear it from Doc-“This is the one job that really fits my personality, unfortunately now I’ve gotten myself into a situation where I am no longer employable at a “real” job so I’d better be good at the ‘sharkin’.

You’ve seen our work on…

Reservations and bookings for the white shark trips can be made online.